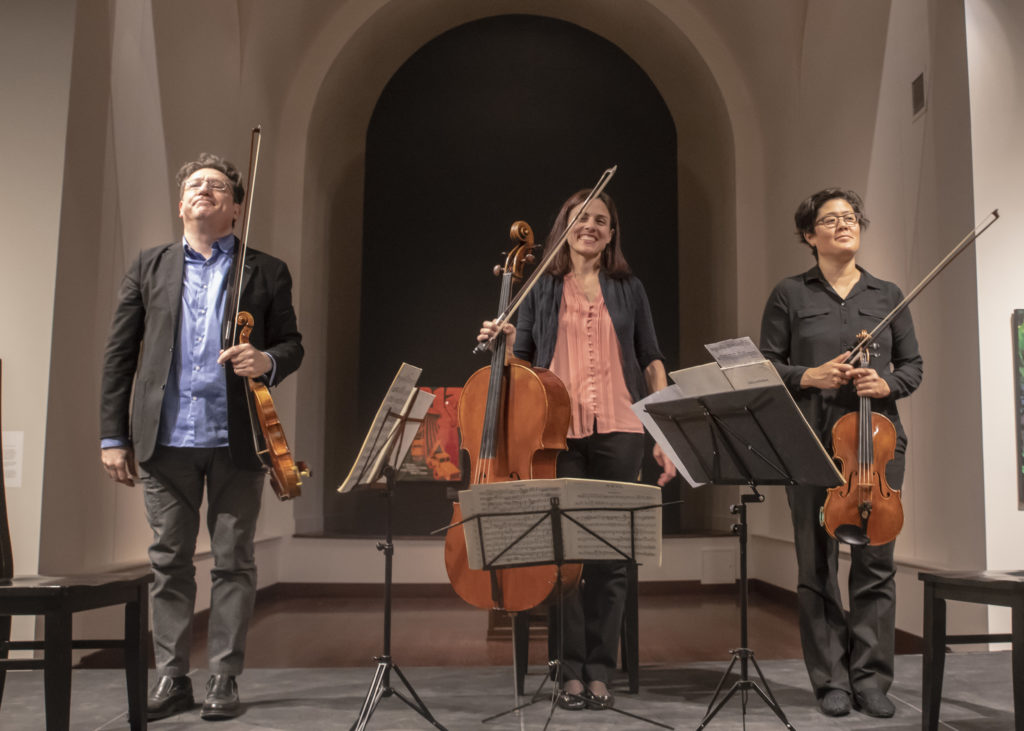 The Friends of the SPCO organizes a variety of fundraising events throughout the year.  Some of our past events have included Friends, Fashion and Fun, Music at the Museum, Conversation with Books–a yearly book group hosted by a lively panel of avid book readers;  parties and post-concert receptions; a Spring Treasure Sale and Evenings with Musicians–evenings with small groups of SPCO musicians held in members’ homes. 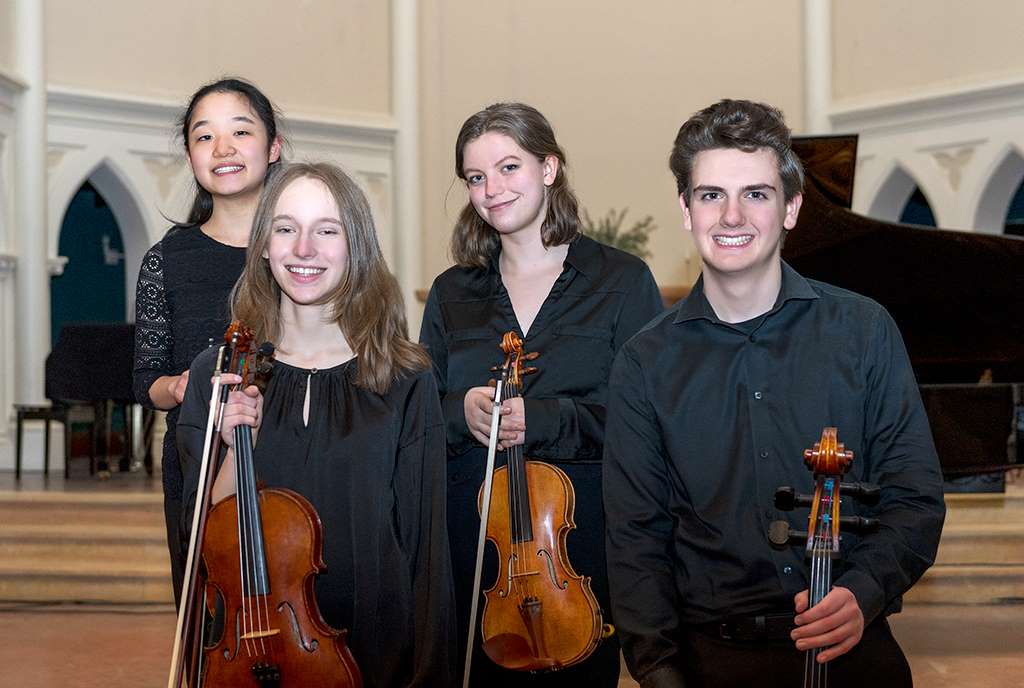 The Friends began offering an annual competition for talented young chamber musicians in 2012. This season brought a new chapter in this exciting endeavor: we launched a partnership with the Saint Paul Conservatory of Music (SPCM) as co-presenter, welcoming eligible young musicians from across four midwestern states in addition to Minnesota.

Four groups vied for prizes in this year’s Finals, held on March 5 at the SPCM. Taking First Prize in Strings was the Alsephina Quartet; its members, shown left to right, are violinist Kana Ahara, cellist Brad Gibson, violist Eleanore Richards and violinist Grace Wetzel. They also took home the Grand Prize, which includes the opportunity to perform prior to a Saint Paul Chamber Orchestra concert in 2022-23.

Second Prize in Strings was awarded to the Great River Trio; Third to the Esterhazy Quartet; and the Winds Prize to the MYS Woodwinds Quintet. Congratulations to them all!

We owe thanks to many for the success of this year’s Competition. Dr. Rena Kraut of the SPCM served ably as director of the event. Donors of the monetary prizes ranged from our own group, the Friends of the SPCO, to Honeysuckle Music, Claire Givens Violins and Midwest Musical Imports. Our judges included violinist Stephanie Arado, assistant professor of violin at the U of M and artistic director of the Bakken trio; SPCO violinist Maureen Nelson; and Fei Xie, principal bassoon of the Minnesota Orchestra. They all did double duty, judging astutely and offering a brief workshop with each group after its performance. We’re deeply grateful also for the involvement of our emcee, Melissa Ousley, who hosts Minnesota Public Radio’s Friday evening broadcasts.

Last but never least, kudos to the members of the Friends Board who assisted with many tasks on the day of the Competition: Friends Co- Presidents Carolynn Johnson and Andrea McCue; former Competition co-chairs Anette Conklin and Donna Ahrens; and Maril Barnard, Lynne Beck, Penny Chally, Mary Cunningham, Ruth Murphy and Sherry Spence.

Visit thespcm.org/competition for more information. And let us know if you’d like to be involved with this most rewarding activity in future years! 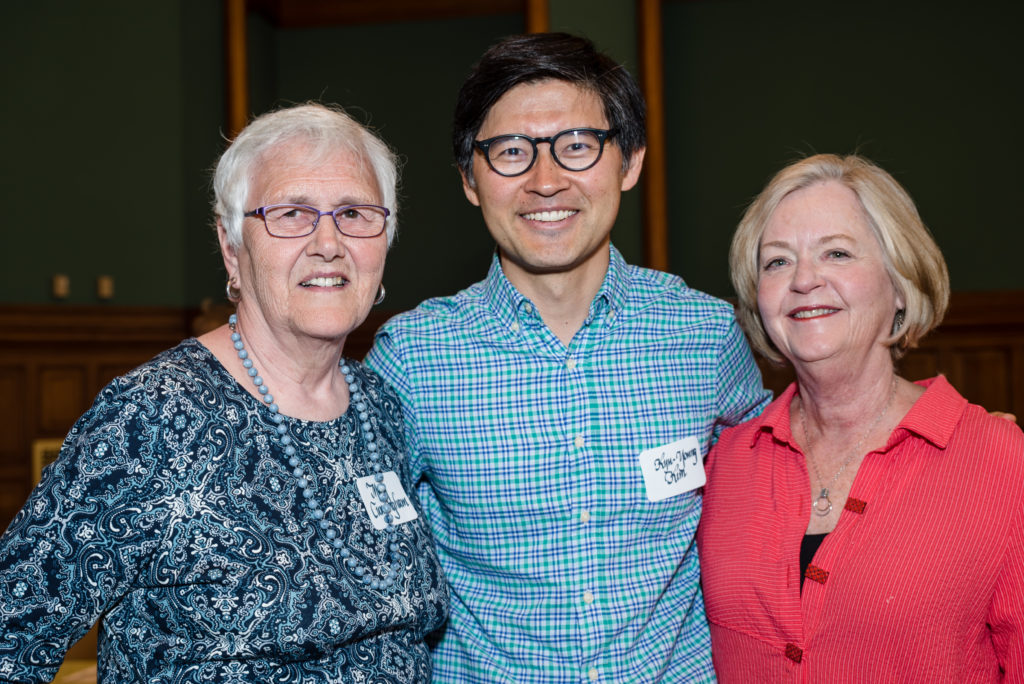 We were unable to host luncheons due to the pandemic
but hope to resume this fun event in late 2021.

Music historian, Dr. Daniel Freeman, has presented his entertaining lecture series over the years with classes on music history, the lives and music of great composers, operas and music from the current SPCO season.

The Friends of the SPCO holds their annual meeting and luncheon each May or June.  A short business meeting precedes the luncheon and features a musical program or speaker.  Friends and their guests are welcome. 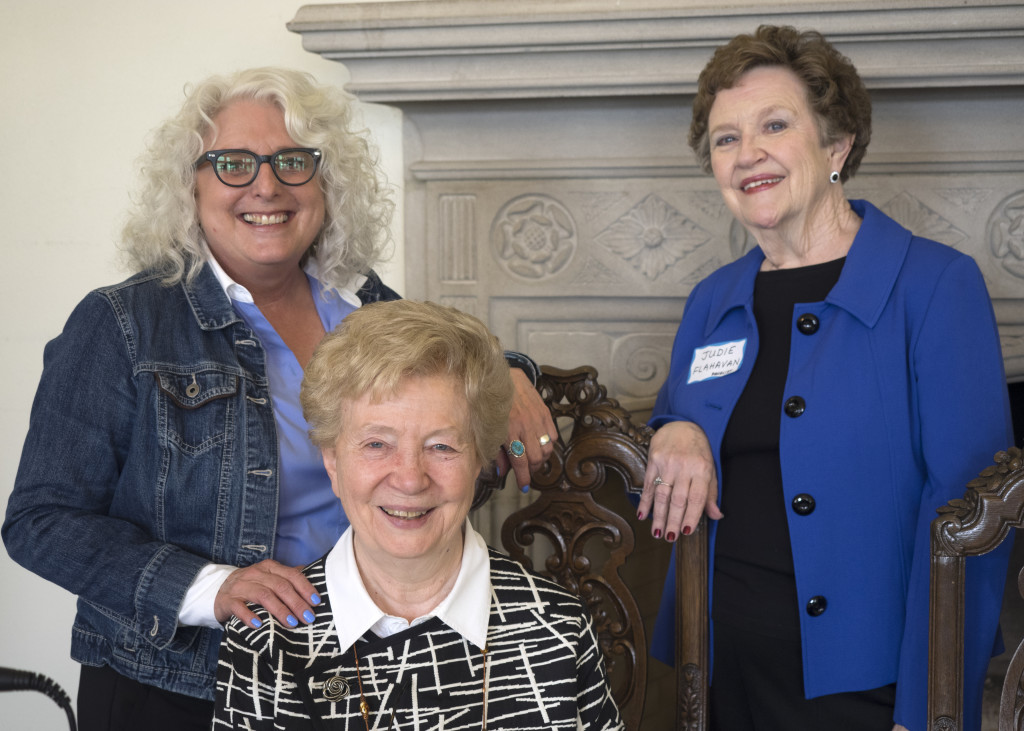 Conversation with Books is the perfect opportunity to hear the opinions of a lively panel of three avid book readers from St. Catherine University, as they discuss a variety of books.  This is a yearly event and is open to the public.

This year we did not host a Conversation but our members were invited to join the Conversation with Books hosted by St. Catherine University. Many thanks to our friends at St. Kate for this opportunity.

Volunteer opportunities are many!  Friends assist with educational and family programs; chair or work on event or administrative committees; participate in fundraising events and Orchestra Appreciation Luncheons and help organize and run the Saint Paul Chamber Music Competition.